Recently I reviewed the programming languages I’ve used over the 28 years1 of my programming career. The result is shown in the chart below. (Click on the image to see it full size.) 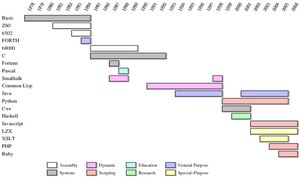 There are some obvious trends here2. The languages are mostly getting higher level. There are a few “survivors”: languages that I’ve used over the the course of a decade, although discontiguously: C/C++, Common Lisp, and Java. Java has replaced C (except for a stint around 2000 where I went back to low-level graphics programming at AlphaMask), and the scripting languages have taken over from Common Lisp — they’re slower, but they’re terse, have better libraries, and are easier to deploy.

It didn’t surprise me that there are so many languages. For one thing, I like languages, and I enjoy learning how to program by learning new ones. For another thing, times changes and programming languages get better. You’d have to be crazy to program in 1970’s BASIC these days. (That’s BASIC, not Visual Basic. The language I cut my teeth on didn’t have functions or structures.) And there just isn’t much call for Z80 assembly any more.

But why so many languages at one time?

The reason is that different languages are good at different things. When I first learned to program, I used BASIC for everything. Then I started using assembly for code that had to be fast, but I stuck with BASIC for doing my homework. (In tenth grade I wrote programs to multiply and invert matrices, so I wouldn’t be bored silly doing it by hand. It took longer, but I had more fun.)

This is what the second chart shows. Again, click on the thumbnail to see the full size version. And beware! — the colors don’t mean the same thing as in the chart above. (Sorry.) 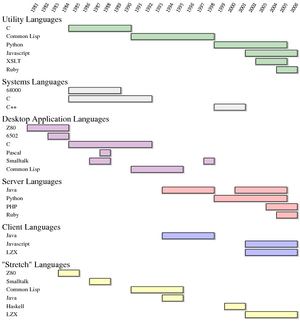 A utility language is useful for solving small problems and for exploring problem domains. It’s what you write your ten-minute program in. If you can use your utility language as your file manipulation language and your build language, all the better. (For a while I did a lot of programming in C and then Java, and I tried to use make and ant for these. Now that I’m using Ruby as my utility language, I’m a lot happier using Rake instead.)

(“Application” for me used to mean desktop applications. Recently I’ve only written web applications — although I did write a MacOS app a few months ago, in order to learn about the MacOS toolbox. That’s why the “Desktop Application” category in the second chart trails off, to be replaced by languages for writing web applications, and browser-based clients that connect to them.)

Sometimes a stretch language becomes a utility language or an application language. This was the case with Common Lisp, which took me a while to understand, but for a while was my most productive language.

More often, the concepts that I learn from a stretch language are helpful in using other languages, even if I have to express these concepts by writing the equivalent of macro-expanded code or a VM. For example, I’ve written a continuation-based pattern matcher in Common Lisp and a logic program in Java, even though neither language supports those respective features. Designing the programs as though the features existed made a hard problem tractable.

And finally, learning concepts from one language makes it easier for me to recognize them and start using them when they’re available in a more mainstream language or one with better deployment characteristics. Those of us who were familiar with advise and the CLOS MOP had a leg up on understanding how to use AOP when it came around to Java. The modern round of scripting languages (Python 2.x and Ruby) have MOPs — if you’re familiar with them from Smalltalk, you know how to take advantage of them in Python and Ruby too. And if I ever have to use C++ again, at least I’ll know from Haskell to look for template implementations of combinator libraries.

Here are the languages that I’ve learned from over the years, and what I’ve learned from each one3. Some of the languages that aren’t in my list would be perfectly respectable stretch languages for someone else — I just happened to be familiar with their concepts by the time I got to them. For example, Python is probably a fine way to learn about OO (and my son learned a lot of OO concepts from Logo MicroWorlds), and I could have learned metaobject programming from Ruby if I hadn’t already learned it from Smalltalk and Common Lisp.

Right now my stretch language is Haskell. When I write in Haskell, I feel like a beginning programmer again. I can’t use it when I’m in a hurry, and I don’t use it when I’m more interested in the problem domain than in the craft of programming. Reading Haskell is like reading poetry (I’m very slow at it, and I can’t skim because the new-concept density is very high), and writing Haskell is like writing poetry (something else that takes me forever). As opposed to Python and Ruby, which are more prosaic, and Enterprise Java, which is more like a tax form.

Estonian — thanks to Weronika Pawlak.

Serbo-Croatian — thanks to Jovana Milutinovich of the University of Belgrade in Serbia.