I posed a second-grader the question of what nine squared was. She reasoned that ten squared is 100, and nine times ten is ten less then that, and nine times nine is nine less than that, so the answer is 81. Then I asked her what eight squared was, and she was flummoxed. She saw that it was a similar problem to the one she’d just solved, but wasn’t sure how to apply the analogy.

Here are the pictures that showed her how to figure out the answer. We drew the location of the squares on a multiplication grid: 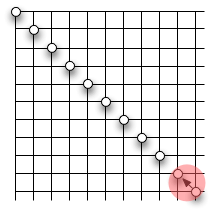 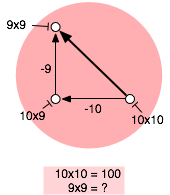 Two problems can have different numbers but the same structure. This is the problem structure for both problems shown together:

And then she got it.

Here’s what didn’t work: explain that adding three to both the minuend and the subtrahend leaves the difference unchanged. Seven was too early for something this symbolic. We used a number line instead: