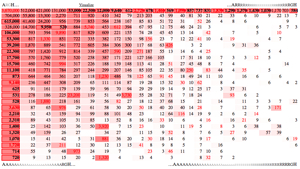 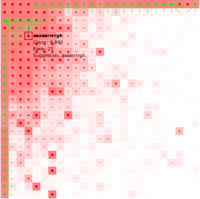 In the late nineties, I tried using internet search as a spelling corrector. (I think I was using AltaVista at the time. It was the latest and greatest search engine, supplanting — was it Lycos?)

At the time, for the words I tried, there were about two orders of magnitude between a misspelling and the correct word. A spelling variant, such as “color” and “colour”, were typically less than one order of magnitude.

In 2002 I used Google to figure out the most common spelling for “closable”, for use in the OpenLaszlo API. It had been “closeable”; why use a spelling that most people would guess wrong the first time, I figured. [Update: This paragraph originally said the word was “resizeable”, which is a straightforward misspelling.]

Here’s what this looks like today. First, a common misspelling:

And a couple of spelling variants:

And some other acceptable variants:

(What’s the difference between an acceptable variant, and a misspelling? An interesting topic for another posting. Maybe.)

It’s clear that a wide range of spellings are acceptable. What’s the most common?

Without further ado, I created this page to help me find the answer.