The slides from my PyCon 2005 talk about Jython and the OpenLaszlo compiler are online (PDF). I’ve corrected some dates and minor typos: 3K+1.5K does not equal 6K, as I realized once I was standing at a podium with a large slide that displayed my math skills behind me, and a large number of technically sophisticated smart people in front of me.

Some illustrations from the talk:

Dataflow for implementation of the KRANK feature for startup time optimization: 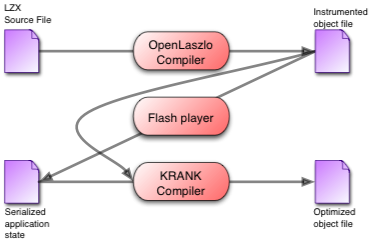 Dataflow for the OpenLaszlo ECMAScript compiler: 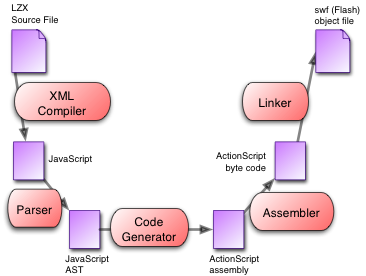 (The PDF shows what the data looks like at some of these stages.)

Deployment diagrams with (top), and without (bottom), the OpenLaszlo server. Deploying with the server requires a J2EE servlet container (Tomcat, JBOSS, Weblogic, Websphere, etc.). Serverless deployment works with Apache and consumer-price ISPs (such as the one that hosts this website). 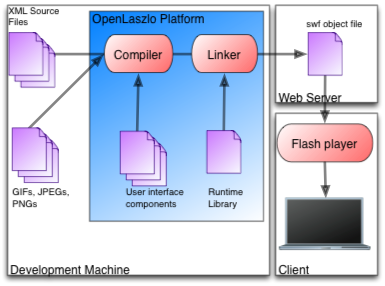 (Caveat: the server also handles caching, GIF transcoding, RPC, and the persistent connection, as this animation illustrates. The diagram above just shows the initial download.)