Last week Laszlo announced its web mail application. Later this year Earthlink will deploy a branded version of this application. 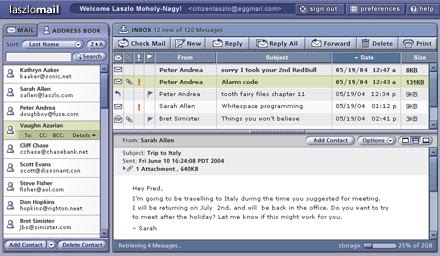 Laszlo Mail is being built on top of Release 3.0 of the OpenLaszlo platform.

Congratulations to everyone involved in writing this application, and to the people who have been worked on the platform extensions that make it possible to write applications like this in Laszlo. Writing good client applications is hard work.

Here’s where I plan to use the thing:

Right now, when I’m using someone else’s computer (still happens — the beasties don’t fit in my pocket yet), I have a choice between (1) setting up an IMAP client, or (2) using an HTML webmail interface. These days I always opt for the webmail client, and GMail actually makes it bearable.

I use folders to organize my email. I use a variant of GTD, with folders for projects, context-sensitive items (tickles for future dates, agendas for future meetings), reference material, and archives. GMail just doesn’t play well with folders. Sure, I can make folders in GMail, but my GMail folders don’t respect any organization I’ve created in IMAP. And I’m a drag-and-drop guy — it’s just too hard to move messages between folders with GMail, which is why I don’t use it as my main mail client in the first place.

So right now, I’m stuck with a bifurcated mail experience. The desktop clients (Thunderbird on the PC and Linux, Apple Mail on the Mac) have the UI features I need; GMail (and before that SquirrelMail) have the ubiquity.

That’s what I’m looking to Laszlo Mail to fix. I want to be able to walk up to any computer in the world, catch up on my mail, easily move it to the right folders, and go back to my desktop machine and see messages where I put them.

Some of you do everything on your Blackberry or iPaq. You don’t need the thing. Some of you keep everything in one big Inbox. You can probably get by with GMail. For me, I’m just counting the days…