The developer world is divided into two camps. Language mavens wax rhapsodic about the power of higher-level programming — first-class functions, staged programming, AOP, MOPs, and reflection. Tool mavens are skilled at the use of integrated build and debug tools, integrated documentation, code completion, refactoring, and code comprehension. Language mavens tend to use a text editor such as emacs or vim — these editors are more likely to work for new languages. Tool mavens tend to use IDEs such as Visual Studio, Eclipse, or IntelliJ, that integrate a variety of development tools1.

New languages, such as Laszlo and Groovy, and new language extensions, such as AOP, are typically available for text-editor-only development before they have support within an IDE2. After a while, if the language or extension is successful, the tools catch up. This isn’t just because it’s harder to implement a tool than just a language. It’s because language expertise and tool expertise are to a certain extent alternatives, that each reinforce themselves to the exclusion of the other. Here’s why.

If you’ve spent most of your time learning about languages and how to use them, your picture of the world may look like this:

In this diagram, the choice of language can make a great deal of difference to your productivity, because you know how to apply each language feature to a variety of situations. The choice of IDE, on the other hand, doesn’t matter much, because you’re mostly using the IDE for its text editor — maybe with a little bit of compilation support thrown in, but not for the whole set of modern IDE features that a modern tool maven uses.

Conversely, if you’ve spent most of your time mastering the development tools of your trade, you understand what it’s like to get into a flow state with an integrated editor and debugger, and to go at a program with refactoring and code comprehension tools at your disposal. Your picture of the world may look like this:

An IDE presents huge advantages relative to a simple text editor, for you. The choice of programming language, on the other hand, doesn’t matter that much — you’re mostly working with the same old classes and methods, statements and expressions, in any of them, and the real development power comes from the IDE.

Why can’t one be a language maven and a tool maven? It’s hard. One reason is that developers have limited time, especially for learning new skills. You can use any given block of time to master language features, or to master development tools. Each of these choices contributes to a positive feedback cycle, but they’re competing cycles, so they create divided camps. 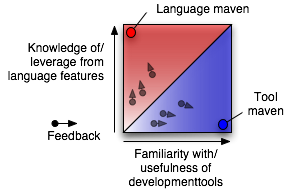 Taking the time to learn language features puts you in a position to appreciate the features of new languages. You can then adopt a language before tools support it, because you don’t rely on the tools for your productivity anyway. And it’s worth adopting these tools early, because their features are valuable to you — making use of them is where your expertise lies.

This means that the more you invest in language features, the more they benefit you, to the exclusion of tool features — and vice versa. And this is what creates the two camps, with two perspectives on the relative merits of language features and tool support:

At any given time, the editor-only developer is in a position to choose from a wider selection of languages — because, at any given time, more languages have a compiler and a runtime, than a compiler and a runtime and a language-aware editor and and debugger and etc.. The diagram below shows what this looks like for a number of languages at different points in their evolution. Within each language, the line at the end of the red transition marks the point at which it has acquired enough features to be useful for some class of programming. The line at the end of the purple transition marks the point at which tool support (beyond a compiler and runtime) exists for it too. At any time, more languages are programmable (the red squares) than have tool support (the blue squares).

In fact, the most powerful languages may initially have the least powerful tool support. The reason for this is that the language developer, like the language adopter, has to make a choice: whether to dedicate limited development resources towards language features, or towards tool support3.

Consider the diagram below. This diagram represents three languages, whose respective developers have chosen to concentrate initially on language features (the top arrow), on tool support (the left arrow), or (the middle arrow) a middle-of-the-road strategy that emphasizes them both equally. The arrows are roughly the same length, representing roughly equal amounts of effort. 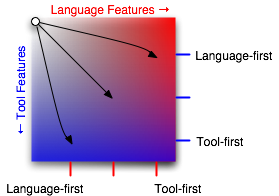 Of course, if a language succeeds, it will eventually get tool support. So in the long run both the language and the tool mavens will use the popular languages, such as Java. That’s where I’m hoping we’re going with Laszlo. 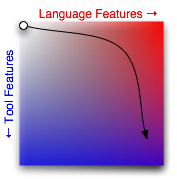 The Perils of the Pioneer

All this makes the language approach sound comparable to the tool approach; it’s just a matter of which skills to learn. But this isn’t always true. We could argue about whether understanding closures or a source debugger makes one more productive. But what isn’t arguable is that there are penalties, beyond the lack of tools, to adopting a language early.

One is that the language may not have staying power. Another is that, just as tools lag initial development, so do other ecosystem artifacts such as books, articles, newsgroups, and, in the enterprise world, the ability to hire developers who know a language, or to be hired on the basis of knowing one.

There are contexts where none of these disadvantages matters. If you learn languages easily, finish projects quickly, and move on to new projects frequently, it doesn’t matter whether a language is going to succeed, so long as it helps you with your current project. If you learn languages from reading source code or reference manuals, you don’t need the books and articles that will follow later. And if you’re working with a small team (perhaps as small as one) of elite developers, you aren’t hiring them for what they already know anyway.

Which isn’t to say that you can’t be an elite tool maven too, it’s just that the conditions for success are different. You can be the only one on a team to use Eclipse. If you’re the only one on your team using Haskell, something is probably wrong.

Bob Congdon points out Lisp and Smalltalk as counterexamples to the “language developer’s dilemma”: both are powerful languages with powerful development environments.

Lisp was a powerful language first, and had a powerful environment second: it only appears to be an exception because it has been around so much longer than any other extant language and has had time to acquire both. Smalltalk, however, is a genuine exception. Smalltalk might be viewed as a step backwards in language features from Simula 67, and a simultaneous step forwards in tool support — but this is holding the language to a higher standard than any other.

Congdon also points out that it is possible to both a language maven and a tool maven. True in theory, just as it’s possible in principle to become both a concert pianist and mathematician, but in practice there may not be enough hours in the day to do both.

And Harry Fuecks explains some of what I was trying to say better than I did, as well as adding points of his own.