Last month, Laszlo Systems released the Laszlo platform as Open Source. The intent was to to remove the bottleneck in the virtuous cycle of software development.

Today IBM alphaWorks released IDE for Laszlo. This is an Eclipse-based IDE for creating, editing, debugging, and testing applications written in Laszlo

Eclipse is an impressive platform, and the IDE for Laszlo is an impressive effort. This page demonstrates many of its features, with screenshots for each. (It was written in LZX, using IDE4Laszlo.) Kudos to the developers! 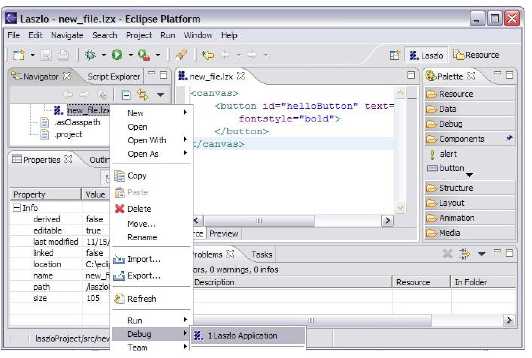 IDE for Laszlo is a technology preview of an Eclipse-based development environment for creating, editing, debugging, and testing applications based on the LZX declarative mark-up language.

Laszlo is based on LZX, which is an XML and JavaScript description language similar in spirit to XUL (XML User interface Language) and XAML (“Longhorn” mark-up language by Microsoft). The Laszlo Platform is an open-source platform for the development and delivery of Rich Internet applications (see http://www.openlaszlo.org for more information) where the LZX XML mark-up is used to create the user interfaces.

The IDE consists of a set of plug-ins that allow creation and testing of Laszlo applications, all within the Eclipse platform. These applications can then be deployed and run on a Web server. IDE for Laszlo also provides a rich editing environment for the LZX mark-up language. Its editing features include XML- and script-based content assistance, XML syntax highlighting, and XML code formatting.

In addition, IDE for Laszlo allows the developer to preview the resulting application without deployment, within the Eclipse environment. It supports markers for reflecting compilation and syntactical errors. When development is complete, the applications created can then be deployed and run.